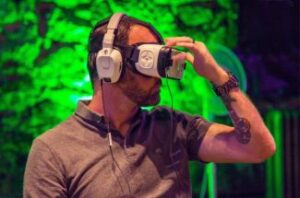 If you’ve ever wanted to explore the basics of VR (virtual reality) game development, leaving Nevada County is no longer a necessity thanks to the efforts of the Connected Communities Academy.

Virtual reality has become quite a hot topic over the last year, with a lot of businesses looking to create simulated worlds to explore with specialized VR headsets. According to published reports, companies like Disney and Comcast are currently investing in VR, hoping to get a jump on this burgeoning market. Everything from how we shop to how we watch YouTube videos — and how we play video games — is being slowly taken over by virtual reality.

A brand-new organization, the Connected Communities Academy is hoping to get locals involved and interested in technology careers, says founder Shavati Karki-Pearl. She hopes that their VR classes, which are designed for those who don’t have prior experience, help build interest and shed light on the tech sector.

“We’re trying to bring awareness to the community that this is a viable career path that you can follow,” Karki-Pearl said. “This is one industry where people think that if they’re not super-smart, there are a lot of barriers. We want to make it more accessible. There are people that are unemployed, people looking for career changes, people looking to make better wages … We know that they probably never considered that this was something that they could do.”

The VR game development class being offered by the academy will be split up into three distinct parts spanning a four-week period. During weeks one and two, students will learn 3D modeling with the Blender creation suite. The third and fourth week, meanwhile, will focus on the Unity 3D engine and integration of VR products into devices like the Oculus Rift and HTC Vive.

One of the main draws of the academy is the talent pool of mentors it has acquired, and this class is no different, Karki-Pearl said. The instructors include Sebastian Romanet, Director of VR at Talaris Technologies; Brian Gunnison, a veteran software developer with decades of experience creating consumer products; and Ed Rotberg, a video game developer who has been involved in the development of more than 30 commercial video games.

After the boot camp is over, students will be given the opportunity to create a VR project as a group, with the idea of presenting it at Green Screen Institute showcases and SacVR MeetUp events.

The class will cost $275, and the academy is currently accepting students. Karki-Pearl says that the start date is flexible, and will be based on minimum enrollment requirements.

Though the course has game development in its description, Karki-Pearl stresses that the application of 3D modeling in VR is not simply confined to the realm of video games.

“Even though it’s called game development, it actually has a lot of applications,” she said. “It basically gives you the fundamentals of 3D modeling, and then integrating that into a VR game environment. The common usage is for developing games; however, it’s also being used for real estate modeling, marketing products, simulated training and education. It has many uses.”

It’s also far from the only class the academy is offering. Earlier this fall, the company offered a VR film-making class that Karki-Pearl says was a success and something they hope to offer again. Other courses include an introduction to WordPress, an introduction to web development and more. In October, a weekly three-hour workshop will begin taking place in the evenings, which aims to help people decide what class would be right for them. As Connected Communities Academy expands, the hope is to add more advanced classes for those interested, says Karki-Pearl.

“One of my challenges was finding the right kind of mentors and instructors for this kind of training, because we’re a small community and while we have talent, it’s not in abundance. It needed to be a core group of people who see the vision and are willing to share their skills and knowledge,” she said. “I just want to make sure that whoever is teaching the class has good experience. So, hopefully we can bring in more people to teach these classes.

“We’ve done a lot of work and we’re bringing an awesome opportunity to this region. (We hope) the people seize the opportunity,” she added.

Spencer Kellar is a freelance writer living in Nevada City; he can be reached atspencerkellar@gmail.com.